How to make maths meaningful

This article was produced in partnership with ORIGO Education, an organisation that has been addressing the needs of primary mathematics learning for more than 26 years.

James Burnett has made it his life’s mission to nurture a love of mathematics amongst primary school children across the globe. For more than 26 years, his company ORIGO Education has continued to grow and subsequently enrich the lives of more than 800,000 primary school students across 14 countries including Australia.

“People often say to me, ‘You must be good at mathematics’. I am quick to reply that I write maths books because I discovered there is a better way to teach the subject than the way I was taught at school,” says Burnett, ORIGO Education’s Executive Chairperson and Co-Founder.

Prior to his tertiary studies, Burnett’s experiences with learning mathematics were centred around an approach that was heavily reliant on the memorisation of rules and procedures.

“Understanding was not important. We were simply told that if we followed the steps, we’d get the right answers and everyone would be happy,” said Burnett, who was recently named Queensland University of Technology’s 2021 Outstanding Alumnus in the Education Category.

Burnett discovered a ‘better way of teaching maths’ while studying under Dr Calvin Irons and his wife Rosemary Irons, at the then Brisbane College of Advanced Education, now Queensland University of Technology.

“Calvin must have seen something in me, because after I had been teaching for a few years he asked if I would leave teaching, work for him, and return to university to study a post graduate degree in mathematics education,” he says.

While Burnett was studying, the pair co-authored and published the award-winning Mathematics from Many Cultures. They then had a ‘light bulb’ moment.

“We were talking about how we would like the future to look and it was at that moment we decided to start our own company,” said Burnett.

“I wanted to give teachers a core program specifically written for Queensland schools,” explains Burnett. “I knew it had to be comprehensive with the teacher’s books adding significant value rather than simply serving as an answer key for student work.”

This became one of the best-known primary school mathematics programs in Australia – GO Maths.

Now, a quarter of a century on, Burnett has authored and co-authored more than 300 mathematics resources for teachers and students aged 5 to 12, and his company is exporting across the globe.

During the first wave of COVID-19, Burnett and his team transformed ORIGO’s Big Books into digitally accessible Animated Big Books to teach mathematics concepts and skills conceptually in a logical, learner-friendly sequence that can adapt to classroom needs. The books featured an avatar to assist teachers (one based on Burnett himself) and won the 2021 Educational Publishing Australia Award. 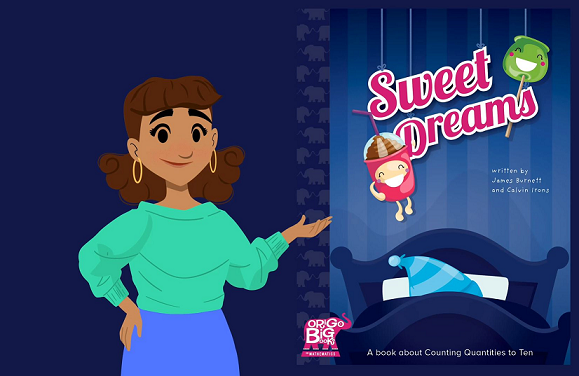 While writing is a passion, providing professional development for teachers and seeing ‘light bulb moments’ is where Burnett finds true joy.

“The goal is to make mathematics meaningful, enjoyable and accessible for all students and teachers.

“It’s more than simply helping students to fall in love with mathematics. It’s ensuring that they have a concrete understanding of the concepts, so that they can use it beyond the classroom.”

ORIGO Education, established in 1995, publishes and covers all facets of primary mathematics education from traditional printed products to digital interactive resources and professional learning throughout the world. The organisation supports primary teachers and students across 14 countries, including the US, Canada, Singapore, Australia, and Thailand.