Being friendly with students: where’s the line?

Scenario: you’re the principal of a small school in a rural town. Having low enrolment numbers, it sometimes seems like you’re running a household or sorts, and in some cases it might even seem as if you’re a de-facto parent.

However, while these might seem like harmless and well-intentioned acts, how you go about doing them can get you hauled before a tribunal, and even suspended from teaching.

So where exactly is the line between what constitutes appropriate and inappropriate in this context?

In this three-part series, The Educator will look at how teachers and principals can navigate this at times murky issue and ensure they operate within the guidelines.

A recent ruling lays testament to the complexity of this issue.

This week, a former principal of a rural Queensland school, who kissed a female Year 6 student on the cheek after she was elected to the student council, was reinstated.

The Queensland Civil and Administrative Tribunal (QCAT) ruled that while the former principal’s physical contact with students was inappropriate, it was not violent or sexually motivated.

The suspended principal, who taught a composite class of students in years four to seven, told investigators from the Queensland Department of Education that the lines got “blurred” in a small school.

But suppose – in this second scenario – that you’re friends with one of your Year 12 students and later commence an intimate relationship with them after they finish school.

One might think that this would warrant dismissal. However, the case below demonstrates how nuanced these issues can be.

In 2013, a Victorian principal was sacked when an independent investigation launched by the school found he had significantly transgressed professional boundaries while she was at the school.

The principal subsequently filed a complaint with VCAT, saying he had suffered isolation and ridicule over a lawful relationship, lost his 30-year teaching career and the respect of his fellow teachers.

The Victorian Civil and Administrative Tribunal (VCAT) later found that the school had discriminated against the principal, and ordered it to pay him $90,000.

The table below, which has been distributed by the Queensland College of Teachers to every principal in Queensland, illustrates the behaviours which may be classed as crossing boundaries and may result in disciplinary action against a teacher. 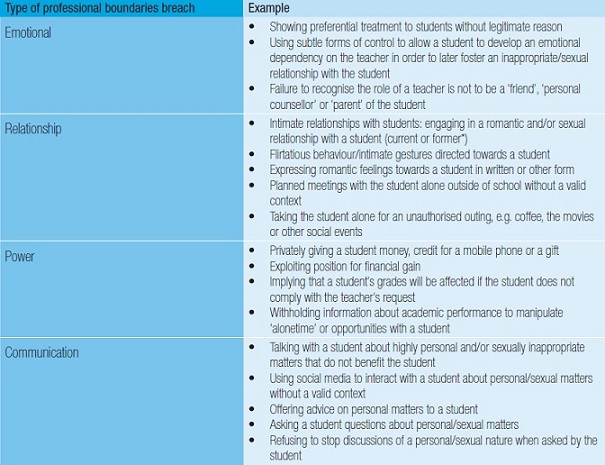