Chemical sciences in the Australian Curriculum 9.0

I think there’s something in most of us that enjoys mixing things together to see what we can create. This is what many students think of when they think of chemistry: the opportunity to tap into that desire to make new things – namely explosions. Fortunately for us teachers, ACARA did not have a desire to blow up the curriculum, and instead has made changes that simply build on what was already in the Years 7-10 Chemistry curriculum.

This was the sequence of topics across Years 7-10 Chemistry previously: 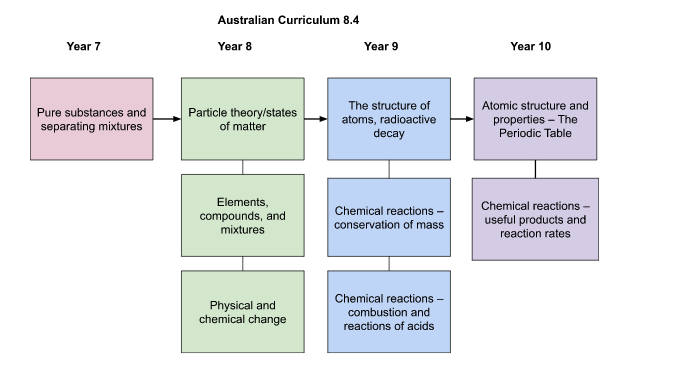 This is the sequence for the Australian Curriculum v9.0:

At first glance it looks like there is now a nice even spread of topics across the year levels, but let’s look a little deeper.

Year 7 remains a fun year. I always found joy in mixing together the most random substances and objects, and then watching students figure out how to separate them. However, teaching pure substances and separating mixtures is a difficult task when students don’t understand particle behaviour and properties. Thankfully, this topic has been moved from Year 8 to Year 7.

The elaborations have been fleshed out more, including details about the effect of heat on motion and energy of particles, and comparing attractive forces and the properties of different states of matter. A notable inclusion is the process of diffusion in liquids and gases. Overall, for most teachers this is content they were already including in Year 8, and the resources and planning simply needs to be moved to Year 7.

Since particle theory is covered earlier, the elaborations for pure substances and separating mixtures now explicitly mention particles. This is the only real change, so there would only be minor adjustments of resources (if any at all).

Year 8 continues the theme of mostly minor changes. The elements, compounds, and mixtures topic has the same key ideas, but the elaborations are more detailed. The creation and use of models is a huge concept running through science, and the Australian Curriculum v9.0 puts a greater emphasis on these in Chemistry. The content descriptor for this topic includes representations of elements, compounds, and mixtures, such as 2-dimensional and 3-dimensional models, symbols, and formulas. The emphasis on models means students can continue to explore the concepts with hands-on teaching aides like molecular modelling kits. Of note is the inclusion of solutions, suspensions, and colloids. Although often taught in Year 7 during the separating mixtures topic, this content will need to be moved to Year 8.

The Year 9 topic about atoms and radioactivity has more specific elaborations compared to v8.4, which is nice for those of us who like more clarity in scope. Overall though, there aren’t many changes, which means your resources only need to be tweaked. There is an emphasis on the model of the atom and how it changed over time as more evidence was gathered, which is most likely what schools were already teaching.

The majority of elaborations are now weighted towards isotopes and radioactive decay. There are five isotopes specifically mentioned, focussing on the different types of decay and timescales for decay. I’m enjoying how in v9.0 there is usually an elaboration on how to connect the topic to real-world concepts, such as how radioactivity is used in medicine and industry, as well as for checking for faults in materials in spacecraft and aircraft.

Frustratingly, there is one elaboration that is vaguely worded. I am interpreting it as two separate but connected concepts: that mass and energy are connected no matter how small or large the object, and that mass in an atom can be converted into nuclear energy. This is about as far as I would go with Year 9’s as delving into the specifics of matter-energy conversion and E=mc2 is a deep rabbit hole.

The next topic is chemical reactions. Not much has changed as it is still an introduction to representing chemical reactions, and understanding that the law of conservation of mass can be demonstrated using chemical equations. The real-world elaboration is about ‘green chemistry’ – which could lead into interesting discussions of chemical waste and how chemical processes can affect the environment.

Year 10 is fairly similar to v8.4, starting with how the properties of elements relate to their position in the Periodic Table. Flame tests are now specifically mentioned, as well as the emission spectra. I imagine for most teachers there will be little to no change in resource use for this topic. However, for the next topic, instead of using the vague wording of ‘types of chemical reactions’, v9.0 now specifically talks about synthesis, decomposition, and displacement reactions. For some teachers this isn’t a change to how they teach the topic, but for others it will either be a relief or an added stress to know these reaction types need to be named and remembered by students. The elaboration gives specific examples of these reaction types, which provides a more narrow scope for teachers who need this. Factors that affect the rate of reactions are still included, so this topic remains one that can be taught alongside many exciting experiments.

Overall, the sequencing of topics across the years allows for building on knowledge and adding complexity as students progress. Hopefully your reaction to v9.0 is not mixed! I think you can synthesise the changes into exciting lessons full of energy that will increase the rate at which students fall in love with chemistry.

Jacqui Bennett is the Science Content Associate at Edrolo.