Home schooling was on the rise, even before COVID-19

The NSW Education Standards Authority (NESA) has released the 2019 Home Schooling data, showing that home schooling has been on the rise, even before the COVID-19 pandemic forced schools to switch to remote learning.

The two areas of NSW with the highest uptake of home schooling are Western Sydney, followed by the Hunter region.

Dr David Roy from the University of Newcastle, who works closely with governments and disability advocacy groups, says that unlike many other states, NSW publishes detailed records, and they paint an interesting picture that is ignored at federal level.

“Whilst mainstream schools increase in enrolment at the equivalent population growth level of c.2%, home schooling as a choice has increased by 61% of the last five years up to 5,906 students by December 2019; remembering this is pre-COVID19,” Roy told The Educator.

“Interestingly numbers do not decrease when children move from Primary age learning to Secondary age learning and there is a fairly even balance of gender uptake. Therefore, the reasons why people are opting for home schooling rather than mainstream becomes key”.

Dr Roy said families are asked why they are choosing to home school, although responses are optional in the registration process, with 17% choosing not to give a reason and 27% having an unclassified reason.

Of the categories offered, the largest reasoning is Special learning needs (including disability) which has increased to 25%.

“Speaking to families it is clear that many, rather than choosing to home school, feel there is no other option given the lack of support or discrimination that children with a disability find in public schools,” Roy said.

“Three years and three ministers of education after the NSW Parliamentary Inquiry into the education of children with a disability, nothing appears to have changed. Segregation and denial of curriculum and assault of children by adults in schools is still happening”. 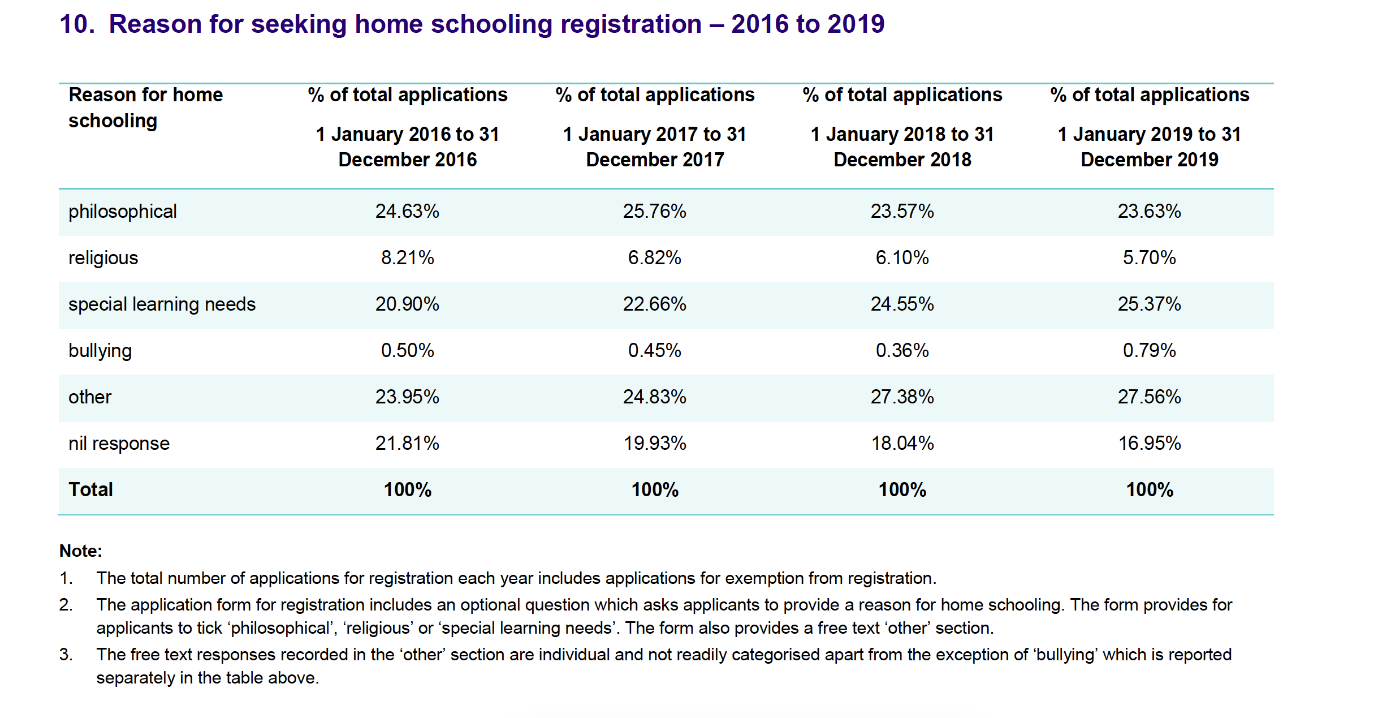 According to the data, 24% of choice for home schooling is through philosophical reasons, as in wanting to move away from mass classroom education and focus on individual learning. Religious reasons are lowering to 6% of choice and bullying remains at less than 1% of the reasoning.

Dr Roy said that as more materials and teaching resources are available online, and the increasing number of social support groups for children and parents, home schooling is no longer the exception but being recognised as a fourth system in NSW.

“The pandemic shut down has shown to parents the potential viability of learning from home, and whilst greatly supported by teachers and a schools, it will be interesting to see how many families choose to continue on this route, despite the obvious financial sacrifice required to home school [no education funding form State of Federal level is made available to children whom home school],” he said.

Roy said the NSW Department of Education may need to consider making distance education more widely available if they wish to “stem the steady trickle of children from the mainstream system to the home”.

“They have previously said it wasn’t possible to expand. Their teaching staff have proven the executives wrong in the past three months”.