How sport can help students take charge of their learning

Around the same time Christie Jenkins was learning to read, she was also learning to backflip on the trampoline – something she enjoyed so much that she went on to get lessons.

“I went to lessons and came home doing backflips. I was addicted to the point where my parents went on holidays and told them I didn’t want to go with them because I would have missed training,” Jenkins told The Educator.

Over time, she realised that a lot of the skills she had learned were transferrable to her experience at school.

“Given that I was dedicating a lot of time to training, it forced me to become really efficient with my studies and figure out which learning techniques worked for me and how to fit the same amount of study into half the time my peers had at school, which later helped me in my career,” she recalled.

“Sport is also a type of meditation. It really helped me focus and relax, so I would come back to my studies feeling very refreshed and motivated because I had that outlet to clear my head”.

Learning to bounce back from defeat

Around the time Jenkins was eight, she won the Victorian state championships in trampolining and began prepping for the national title.

“I was full of confidence. I’d trained extremely hard for the entire year, did my routine as well as I possibly could, and when I finally got to compete in the national title…I came dead last,” she said.

“It was brutal. I remember sobbing my dad’s arms but feeling so determined to come back the next year and win the national title”.

And win she did – twelve years in a row.

During Jenkins’ sporting career – spanning trampolining, cross-fit and beach volleyball – she has held over 40 national titles, Australian records that still stand, international gold medals, and a bronze at the Youth Olympics.

“Early on in life, I appreciated the benefits of competition,” she said.

“There’s no better feeling than standing up on that podium as your fans are screaming and hearing your country’s national anthem played. You’re never going to feel prouder than at that moment in your life”. 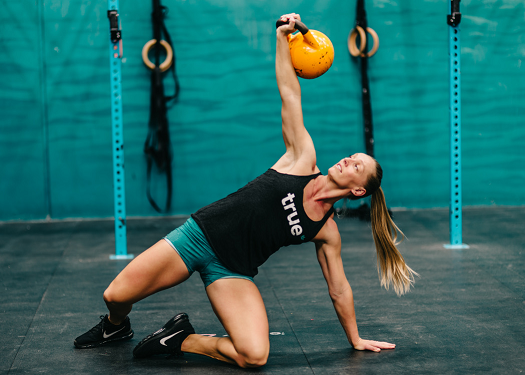 As an athlete and inspirational role model for young women, Jenkins sometimes works with schools in Victoria where she mentors senior students from both genders about her journey, and educates them about the transferable skills that sport can provide.

“Companies are structured in a way that rewards incremental thinking; ten per cent improvements every year; small changes in products; no risky investments,” she said.

“But the greatness we admire in our sporting and business icons doesn’t come from incremental thinking. It comes from flipping your thinking – aiming ten times higher”.

Jenkins noted six crucial ways that sport can help students achieve their best, both in and outside the classroom, setting them up for success – whatever they might consider that to be.

“Discipline is a big one. In sport, the odds of success are incredibly low, so discipline can make all the difference,” she said.

“That same discipline and focus is also required in your career later on”.

Another key skill, says Jenkins, is the ability to perform under pressure.

“In trampolining, I trained for 17 years and then did a routine that was four seconds long,” she recalled.

“That’s an insane amount of pressure to handle. So, the ability to perform under pressure is critical, whether it’s on the sporting field or during high-stakes exams”.

“Often, we think of feedback as someone judging or attacking them, but once you get into sport, you realise that feedback from a coach or mentor is designed to help you,” she said.

“Understanding this can help you improve rapidly”.

Studies have shown that teaching students about resilience can have far-reaching positive implications for their wellbeing.

Jenkins says her own experiences have taught her about the value of bouncing back after loss and being humble – in both victory and defeat.

“A big part of this is not saying I’m good’ or bad at this, but about saying ‘I haven’t achieved what I wanted to yet, but over time and with effort, I know that my efforts will lead to results’,” Jenkins said.

“So, it’s about seeing your ability as something of a journey rather than a I’m good or bad based on one result”.

The value of being a team player is something that Jenkins understands the value of. After all, none of her trophies would have been possible without it.

“How to be a good team mate is definitely a skill required for life,” Jenkins said.

“Sport values a strength-based approach. We let each person shine in what they’re good at, and we have to support each person in different ways, so sport is great at developing that, rather than a one size fits all approach”.

Last but certainly not least, Jenkins points to the importance of sport helping students achieve, and maintain, good physical health.

“A healthy body, and a healthy body image is a big issue for young women especially,” she said, adding that the confidence that achieving in a sport can bring teenage girls can have a profound impact on their attitudes in this area.

“It’s so important for girls to be proud not just of what their body looks like, but of what it can do”.