Release of the 2018 NAPLAN annual report this month confirmed the preliminary results of the 2018 tests, which revealed a further decline in the proportion of students meeting the National Minimum Standard (NMS) in writing. 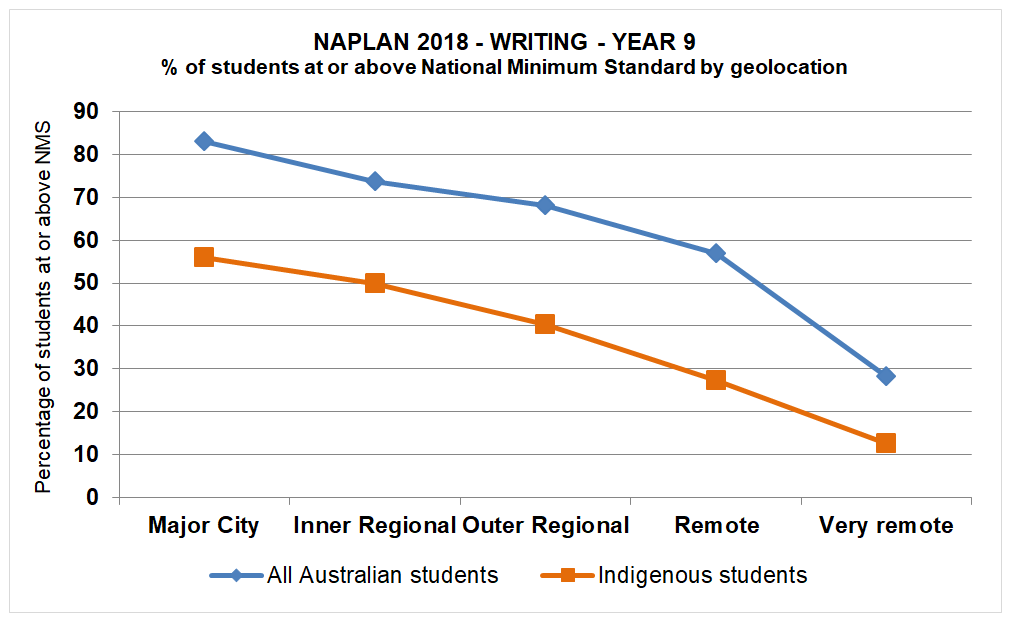 So, what’s up with writing to make achievement trend down?

There have been speculative answers to this question since release of the 2018 data. One suggestion is that, with an increasing reliance on digital technologies, students are less adept at the physical skills required of writing; another is that young people’s increasing engagement with social media is limiting their writing expression to short sentences and emojis. Certainly, the generally higher results in 2018 NAPLAN for students who took the writing test online suggest that the mode of testing has an impact on student achievement.

Could it be the nature of the test itself? Results in the years prior to the change from testing narrative writing to persuasive writing were either relatively stable, or at least the rate of decline slower, suggesting that perhaps the way persuasive writing is assessed in NAPLAN tests needs review. This, however, does not explain the steady decline in results over time.

Possibly, as already inferred, the rate of decline is simply an inverse of students’ increasing use of digital technologies and less time spent mastering the use of pen or pencil. With testing moving online, only time will tell the extent of impact relative to mode of testing and assessment tasks.

Queensland’s Education Minister, Grace Grace, has suggested the problem could be that NAPLAN tests have lost their effectiveness over time, partly due to unintended consequences such as ‘teaching to the test’, reduced time spent on teaching the curriculum or increasing levels of anxiety and stress in students sitting the tests. None of these suggestions, however, explain why achievement in writing is declining while results in other testing domains – including reading, spelling and grammar – are stable or have improved.

Clearly, urgent research into the teaching and assessment of writing in Australia’s secondary schools is warranted.

Australia is not alone in its concern for students’ ability to write – both as a physical skill and as a capacity to compose sustained, or even short prose texts. The 2011 sample testing of eighth- and twelfth-graders under the National Assessment of Educational Progress (NAEP) program in the United States showed some 20 per cent of students at each grade level failed to meet the ‘Basic’ standard. Although the NAEP testing and measurement model is not equivalent to NAPLAN testing, we can see a parallel between the US results and Australia’s Year 9 results for writing in 2018.

Of interest is that the US tests were computer-based but, until 2017 test results are released, it is not possible to draw any conclusions as to the impact of this mode of testing over pencil and paper tests. The results of the 2011 NAEP tests did, however, lead to a substantial research effort which could provide pointers to any research program undertaken in Australia.

For example, a project initiated by not-for-profit The Education Trust, mapped assignments given to middle-school students (sixth to eighth graders) in English language arts, humanities, history/social studies and science. While some type of writing output was required in over 80 per cent of assignments, this was mostly in the form of what the Education Trust describes as ‘writing without composing’, that is, involving note taking or organising, one- or two-sentence responses to text-based questions or multiple short responses. Only 9 per cent of tasks involved the composition of multiple paragraphs. Even in English language arts classes, only 15 per cent of assignment tasks involved the composition of multiple paragraphs.

This finding begs many questions, one being whether the curriculum is so crowded that teachers choose assignments and assessment tasks that help propel students across the breadth of content at the expense of deeper analysis as expressed in extended compositions. I, for one, would be curious to know the answer to this question, although anecdotal evidence suggests teachers have already identified this as an issue. Many schools are building in a requirement for students to undertake extended writing assignments across a range of subject areas and in cross-curriculum projects. Other schools are developing their secondary teachers as experts in teaching literacy skills, not just as subject specialists, or adopting strategies such as making history compulsory for secondary students up to Year 9.

In my own school we have introduced greater attention to writing skills – both technical and compositional – in the Junior School and greater rigour in written analysis in our Middle School.

As a history teacher, I can perhaps be accused of bias in valuing the essay as a tool for teaching writing. But I think anyone who has studied at undergraduate and post-graduate level can attest to how integral composing an essay can be to the thinking process. Joan Didion’s quote, ‘I don’t know what I think until I write about it’, is famous simply because we all know exactly what she means. Some of us may have had our first glimpse of the human capacity for thinking at the tail end of a three-thousand-word essay.

A national research project into NAPLAN writing results is urgent, not just because we need to know if our young people are losing writing skills; we need to know sooner rather than later whether they are being short-changed in the development of their cognitive skills.

Dr Mark Merry is National Chair of AHISA. He is Principal of Yarra Valley Grammar, Victoria.