Opinion: Something rotten in the state of education

We spend more money on education than most other countries. We pay our teachers considerably more. And yet Australian students perform poorly on international tests – and there is little evidence of any commitment to turning this around.

Evidently, something is not going right.

Excellence in teaching is by far the most important in-school factor affecting student achievement. Attracting, training and retaining the best possible teachers must be a priority; but we are getting the fix wrong.

Contrary to a common misconception, the level of teacher pay isn’t the problem. A new education report from the Organisation for Economic Co-operation and Development (OECD) has found Australian teachers are among the best-paid in the world in terms of starting salaries and increments, as well as in comparison to other university-educated workers.

Sure, teachers in Australia do earn less than some other professions – for example, primary teacher salaries are on average 93 per cent of what other tertiary-educated workers earn. But this is a lot more than the OECD average of 84 per cent, and is actually the third-highest in the world. And let’s not forget that Australia is generally a high-wage country. 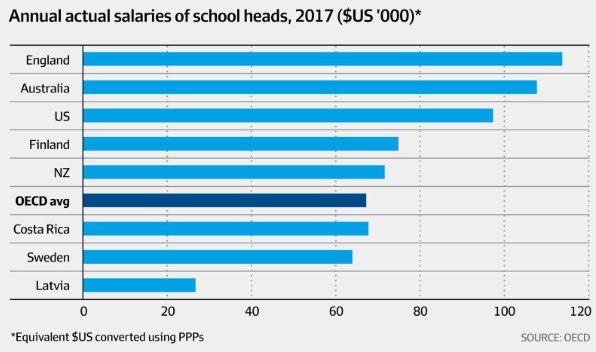 One concern is that teachers’ pay peaks relatively early. After about seven years, Australian teachers reach the top scale – a much shorter period than those in high-achieving countries like South Korea and Japan.

Consequently, our best teachers often end up going into a school leadership role or becoming an education bureaucrat to get a further pay rise, which means they will have fewer or no classes. In other words, the best teachers have to teach less if they want to earn more. That is hardly a good outcome for Australian students.

To attract and retain the best possible teachers we should give principals more flexibility to pay high-achieving teachers more.

Attracting qualified teachers in specific subjects is also a challenge, especially in science, technology, engineering and maths (STEM). For example, approximately 20 per cent of Years 7–10 science and maths teachers in Australia don’t have any university qualification in their subjects.

We could allow differential, market-driven pay rates for teachers depending on the demand for qualified teachers in their subjects. This would encourage more STEM graduates to become teachers.

Discipline-based salaries could allow higher or lower pay depending on whether there is an oversupply or undersupply of teachers in the subject.

For example, if there is an oversupply of history or foreign language teachers and an undersupply of science teachers, schools could have the option of paying science teachers relatively more. This seems like a no-brainer but, like many things in education, such practicality is often taboo.

The truth is STEM graduates tend to be in demand by many employers, making it a tough decision to forgo potentially higher pay in another industry.

It’s also difficult to change careers and become a teacher. It now requires taking two years off paid work to do a master of teaching full-time, or taking even longer to complete the qualification part-time. This is a massive disincentive for many high-achievers who want to become teachers later in life.

And even then, the quality of teacher training at universities is inconsistent and dubious, at best. The four-year bachelor of education produces generalists rather than subject experts, in contrast to past practice that enabled people with specialist degrees to complete a one-year graduate diploma of education.

New teachers in Australia are underprepared for the classroom, compared to those in other countries. In a recent OECD global survey of teachers, Australian teachers reported being less prepared after completing their degrees than the OECD average on most measures, including teaching their specific subjects and classroom management.

Furthermore, a review of initial teacher education earlier this year found that new teachers aren’t being trained how to teach reading properly. Phonics – an integral part of effective early reading instruction, where students are taught the letter-sound relationships so they can sound out written words – is particularly neglected.

If teacher training isn’t equipping new teachers with evidence-based practices regarding how to teach reading and manage student behaviour – the fundamentals of teaching – then what exactly is the point of the expensive education?

The inescapable conclusion is that initial teacher education in Australia often isn’t up to scratch.

Australian taxpayers fork out $60 billion per year on schools. State governments – which are ultimately responsible for running schools – have a duty to reform how teachers are trained and paid, so taxpayers receive a return on their investment. Simply spending more money won’t make the grade.

Blaise Joseph is an education research fellow at The Centre for Independent Studies and a former teacher.