When Murray Kitteringham took up the role of principal at Sir Joseph Banks High School (SJBHS) in 2016, he faced a daunting challenge.

The school’s Year 7 student numbers were dwindling, and engagement wasn’t particularly high either. With just 63 students enrolled in their first year at high school, Kitteringham knew things had to change – and fast.

However, after spearheading an initiative which involved working with local primary schools to support students as they transitioned into high school, Kitteringham began to see a marked transformation.

“I invited the leadership teams, with the support of our director, Jan Green, to a meeting at SJBHS where we pitched the concept that ‘together we are stronger’,” Kitteringham told The Educator.

“CET led the initial conversations our schools were conducting and gave us a pathway to connect more closely. Our end goal was to work smarter, not harder as a learning community.” 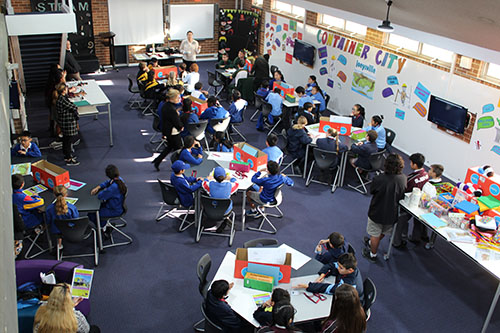 Kitteringham said the school had an image problem within the broader community that was based on a series of incidents that had allegedly occurred many years prior.

“Our school had found this undeserved reputation difficult to shift,” he said.

“I remember pitching to our staff that we had little control over the backyard BBQ conversations in our broader community, however we had a moral imperative as a school to turn the narrative back in our favour.”

Kitteringham said the approach was to “invite and immerse” the primary schools in establishing a collective culture together that focused on core aspects surrounding literacy, numeracy and transition.

“We knew and believed that transition is an ongoing process annually from one cohort to the next. The move into high school is often an anxious time for many parents,” he said.

“The principals of all six CoSs are passionate about public education and the rich opportunities that derive from working on a child’s educational journey as a whole as opposed to a series of disconnected schools that happen to be in the same area.”

An evidence-based approach to community buy-in

Kitteringham said the buy-in from the CoS happened through an evidence-based approach and collaboration with the principals involved.

“We had established the misconceptions about our high school through the CET process and surveys involving our school with the broader community. We had used CESE to conduct an internal school 360-degree survey to identify areas of strength and improvement,” he said.

“We then set about putting our evidence together to pitch to the leadership teams from the primary schools over several meetings that initially occurred with the principals.”

He said this evidence was based upon strong data collected both internally and externally through CET and CESE.

In 2017, the school developed a ‘learning community team’ that started looking at opportunities to become immersed each other’s schools and look for the opportunities that could be built upon.

“Each school showcased their approaches to learning, specifically literacy initially, and we then sat together to debrief and discuss our pathway forward,” Kitteringham explained.

“We agreed that all schools were equal stakeholders, so the responsibility did not lie with one school. To ensure success we developed with our Director Educational Leadership, Jan Green, our first draft ‘CoS Plan’.” 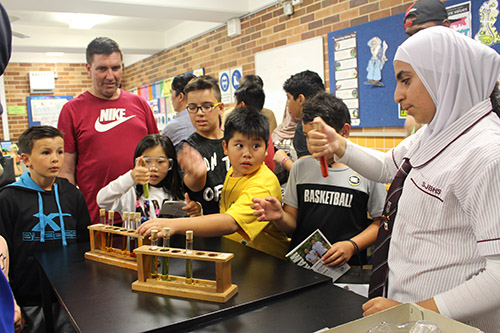 ‘Developing a culture of visible thinking’

Kitteringham said that Cos was ‘born’ through most of 2018 after SJBHS enlisted the Support of a “critical friend” and educational consultant, Kristen Murray.

In April of 2018, the SBS Insight program aired “Teaching Success – How to turn a school around” that featured the success SJBHS had gained as a high school. Kitteringham said this “launched the school’s story into the stratosphere from which we have not looked back”.

“We found a way to shift the BBQ conversations through the combination of hard grass roots work at the coalface and a more positive self-image being marketed through such large-scale exposure,” he said.

In Term 2 of this year, SJBHS launched its “aspirational dream” – a joint School Development Day at Canterbury Leagues Club – where all six schools, including Administrative, Support staff and teachers met together.

“Our focus was ‘Developing a Culture of Visible Thinking’ for the teaching staff and the Administrative staff reflected upon the Excellence in Administration Framework and how this relates to their PDPs. Adventurous but worthwhile,” he said.

“Feedback across the CoS was that working together made us stronger across all schools.” 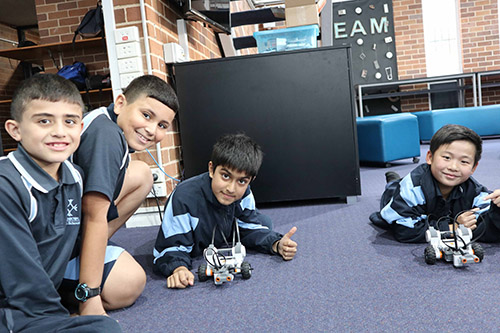 ‘One foot planted firmly into their future’

Kitteringham said it’s clear to see that the school’s hard work has paid off given that Year 7 enrolments have now doubled, up to 128 students. But despite the tremendous success of the CoS initiative, Kitteringham says it is “still very much in its infancy”.

“We have developed a plan that evolves at each meeting and we meet twice a term, and we are tapping into the expertise required across the learning community,” he said.

“This is to ensure that our children have access to a very strategically structured pathway from Pre School, through infants, primary school and high school to leave our learning community with one foot planted firmly into their future.”

Kitteringham said this would preferably be a career pathway that involves further education such as university, traineeship or an apprenticeship.

“We have close reciprocal connections with all of Australia’s major universities across a number of fronts. This includes transition pathways and early entry schemes on offer across most universities,” he said.

Kitteringham said some examples of this include UTS students tutoring SJBHS senior students in the school’s learning centre on a daily basis.

“We are also in the process of becoming a Hub School with UWS where pre-service teachers prioritise our school community to learn the craft of teaching with up to 20 of their peers at a time,” he said.

“We are very proud of our achievements so far and look forward to the next generation of students benefitting from this approach.”