Principals teetering on the brink – report

Increasing threats, violence and excessive working hours are leading to serious distress, burnout and depression among principals, an annual survey of the nation’s school leaders shows.

The Australian Principal Occupational Health, Safety and Wellbeing Survey – which collected data from about 50% of Australia’s 10,000 principals – found almost half (45%) were threatened with violence in 2018, compared with 38% in 2011.

The rates of physical violence show a concerning upwards trend in almost every part of Australia including: NSW, Victoria, Queensland, South Australia, Western Australia, and the ACT.

Associate Professor Philip Riley, from Australian Catholic University’s Institute of Positive Psychology and Education and the survey’s chief investigator, said Australia should adopt “a whole of government approach to education”.

“This would mean the federal government, states and territories combine to oversee a single education budget. The funding agreement should be bipartisan and a transparent mechanism which is simple to understand,” Riley said.

“Clearly, our nation-builders are under attack. Consequently, fewer people are willing to step into the role. At a time when 70% of school leaders will reach retirement age within 2-3 years, we are ignoring a looming national crisis.” 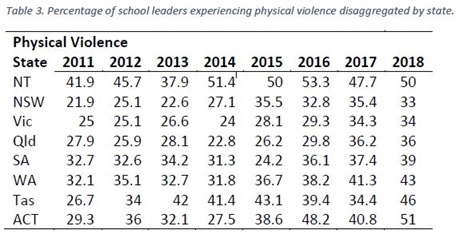 The survey found the sheer quantity of work and the lack of time to focus on teaching and learning were the greatest sources of principals’ stress. Teacher shortages were also a frequent issue. An increasing source of stress is managing the mental health issues of staff and of students.

Association of Heads of Independent Schools of Australia (AHISA) CEO, Beth Blackwood, said the work of a principal has been described as “the best job in the world, with some of the worst days imaginable”.

“The Survey results reveal that principals work longer hours and suffer far higher levels of work-related stress than the general population,” said Blackwood, who was a member of the Survey’s consultative committee.

“They are also at greater risk of physical violence and threats of violence. At the same time, principals report far higher levels of job satisfaction than the general population.”

Blackwood added that the Survey results send a strong warning that when employers or parents trade on principals’ aspirations for their schools and students they are putting principals’ health and wellbeing at severe risk.

“The results can therefore be interpreted as a barometer of the health and wellbeing of our nation as a civil society, and the indicators are there for all to see: for the sake of all those who work and learn in our schools, Australia must do better,” she said.