A 2019 study found that one-in-five young men report having a mental or behavioural condition. Despite this, males are significantly less likely to seek support, making up just 21% of contacts to Kids Helpline in 2018.

Increasingly, young men are struggling to find their place in the world and build their self-esteem and confidence to navigate the pressures and expectations of the modern world.

This is an issue that Cherrybrook Technology High School teachers Rick Pedley-Smith and his colleague Wade Fairclough saw first-hand in 2016 when they started seeing a marked decline in engagement, enthusiasm and learning outcomes among a group of boys at the school.

“We have to clarify we are definitely not psychologists. However, we feel that some key issues that are faced by young men/teens today revolve around the fact that there is no longer a clear delineation between boyhood and manhood,” Pedley-Smith told The Educator.

“Therefore, they seek these challenges on their own and often, this is where they are coming unstuck. Drinking, driving fast, sexual exploits all seem to be a modern “rite of passage” and this is the antithesis of what Rite of Passages should be”.

Added to this, Pedley-Smith says, is loss of sense or purpose, which he said is critical to the concept of being a good man.

“Finally, we see our boys questioning: ‘where do we belong in the ranks of society?’ This leads to a loss of identity and no clear purpose”.

After collecting data and interviewing key staff at the school, Pedley-Smith and Fairclough piloted a tailored program in Term 4, 2016 that would help the boys understand what it takes to be successful, resilient, respectable and diligent young men.

The Rite Of Passage (ROP) program, which mixes weekly lessons with intensive physical training sessions and challenges, set achievable goals that challenged and pushed the boys both mentally, emotionally and physically. 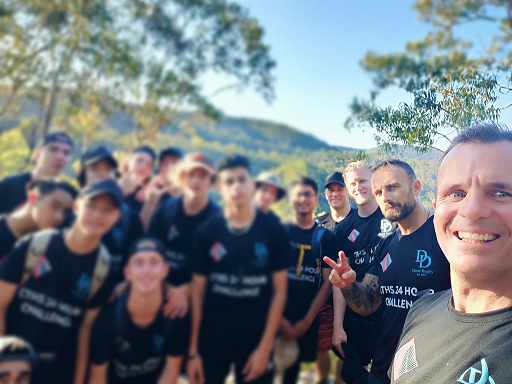 Pedley-Smith, who is also ROP coordinator, says that since its launch, the program has shown encouraging improvements in boys’ mental health, wellbeing and resilience.

“Firstly, the program isn’t perfect. We still struggle with meeting objectives within the group. Throughout our time running the program our perception of what is deemed as ‘success’ has evolved to be more subjective,” he said.

“For example, a student turning up to school and getting through the day could be considered a great achievement for that specific individual. Whereas for others it might be about building self-esteem or developing better relationships with parents”.

Pedley-Smith said he and Fairclough learnt very early on that success “is not just measured by improved grades”.

“It’s about helping the boys to develop the resilience to face the challenges that life throws at them not just now, but also in the future,” he said.

“What we have recorded though, is that the boys all have a much greater sense of purpose and elevated levels of self-esteem”.

He said the boys are now less likely to engage in peer-esteem behaviours and negative risk-taking behaviours.

“The biggest success is that many of the boys involved in the program are much more willing to see a counsellor over an extended period of time. This is our real success”.

Pedley-Smith said some of the most powerful outcomes from the program have been family based.

“We have seen improvements in family relationships and parents reengaging to various degrees with their sons,” he said.

“Through the program, some parents/carers are now able to refocus on the positive relationships they have with their sons”.

Pedley-Smith said this is demonstrated through parents now coming to the school for positive reasons, not solely negative ones.

“They come to school for a three-course meal prepared by their boys and then sit, eat and converse together,” he said.

“We are very lucky at Cherrybrook Technology to have school psychologists who are more than willing to come along to these events and engage with the boys and their parents and even offer advice”.

Pedley-Smith said the school has always maintained the stance that it is not a teachers’ job to tell parents what to do.

“Our job is to facilitate and provide opportunities to assist these boys and their families in achieving positive outcomes”.

Pedley-Smith said parents come to see their sons present a five-minute presentation on a topic of their choice then meet them at school at the conclusion of the boys’ 24-hour Challenge and final Rite of Passage.

“In effect, we aim to help them to redefine how they see their sons and likewise, have the young men redefine their perception of their parents”.