Why home schooling registrations are on the rise across Australia

New data from the Home Education Association (HEA) reveals homeschool registrations in Queensland rose 46% from August 2019 to July 31 this year.

The rise in home schooling registrations has skyrocketed since the outbreak of the COVID-19 pandemic in early 2020 and has been attributed in part to the health risks posed by face-to-face learning in classrooms.

HEA president, Karen Chegwidden, said there are many factors driving the rise in home education.

“Even pre-covid, we have seen consistent growth in the sector over the last five years in every state and territory in Australia,” Chegwidden told The Educator.

“Increasingly, home education is a lifestyle choice. It provides flexibility and fosters close family relationships which is very attractive to many.”

Chegwidden said students with special needs are also over represented in this community, generally because their needs were unable to be met in mainstream schools.

“The home environment is often less stressful and more suitable to students with mental health issues, ASD and attention or learning difficulties. The individual attention that can be given in the home education environment is impossible to replicate in a classroom setting,” she said. 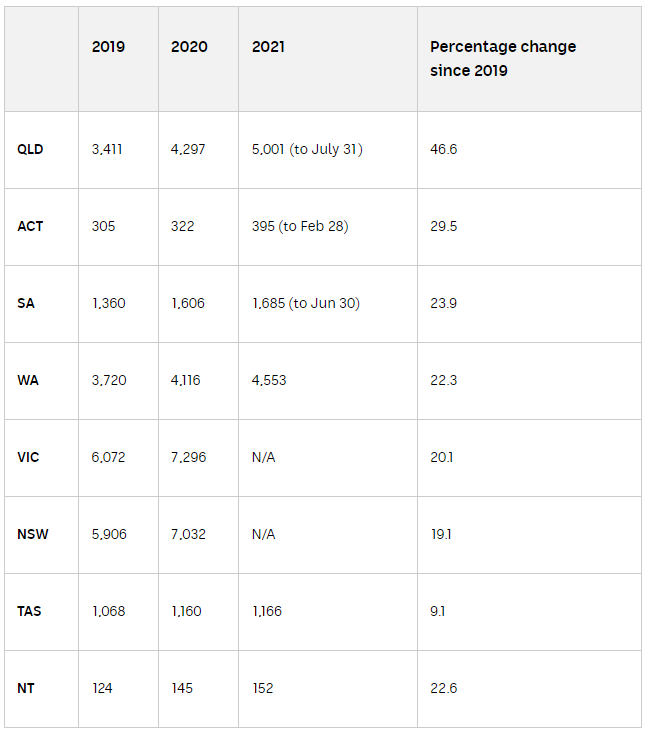 How Covid has impacted on home schooling

Chegwidden said two new groups of home educators have arrived since the outbreak of the COVID-19 pandemic in 2020.

“The Covid homeschoolers have been families who discovered that they loved having their children home more or that they enjoyed taking a more active role in the education of their children,” she said.

“Some of them were families who discovered that their children weren't actually learning as well at school as they thought.”

Chegwidden said there tend to be people post-lockdown who would like to remain engaged with the school system but who are reluctant to send their children back to school.

“This is often around feeling safe or concerns about ongoing disruption with repeated school closures,” she said.

“The Department of Education, particularly in NSW, took a hard-line approach last time, demanding that all children return immediately – and so some of those families also registered for home education.”

“We have seen spikes in home education numbers all across Australia since Covid, although interestingly the state with the highest [to date] increases is QLD, which has not had the same lockdowns we have seen in other states,” she said.

Dr David Roy from the University of Newcastle is an academic representative on NESA’s Home Schooling Consultative Group.

He says it has been known for many years that actual home schooling (as opposed to remote learning) has been significantly on the increase percentage wise for the last decade.

“Families choose home schooling for a multitude of reasons although there is no requirement by any State for reasons to be stated,” Dr Roy told The Educator.

“In NSW there is an option, on the application for home schooling for the reasoning. Interestingly as noted in the NESA Home Schooling Data Reports Relating to 2020 [NESA, 2021] in NSW religion only makes up 4.9% of the reason and this is a declining figure.”

Dr Roy says philosophical reasons – as in belief about education and pedagogy – makes up 23% of the choice and having a child with special education needs 21%.

“It is clear a growing number of families feel the current education system is not meeting their family’s needs,” he said.

“It is also anecdotally interesting to note a disproportionate number of families having teachers in their ranks and choose to home school their own children. That could be indicating a system wide problem.”

Dr Roy said remote learning has shown some families that they can deliver home schooling successfully.

“One would suspect that explains the Queensland data of 25%+ increase yearly,” he said.

“We must remember that the overall numbers of children being home schooled is still statistically small in comparison to the wider population, but it is growing.”

Dr Roy says Australians can count themselves fortunate that they have the choice to home school as some countries ban home schooling where possible.

“There are issues. The cost for families is significant as children who are home schooled receive no funding. A parent must be able to supervise the learning, often resulting in one parent not being in the workforce.”

Dr Roy says the funding for the child that is home schooled returns to the government, pointing out that for every child home schooled, that is about $13,000 annually not going to the education systems.

“With close to 25,000 children being home schooled that translates to a potential $325 million removed from funding,” he said.

“Ongoing system barriers to distance education and the growing remote learning/home schooling success of students suggests the number of children being home schooled can only continue to rise significantly.”

Dr Roy said the rise in home schooling is “but a symptom of society’s inability to support or provide an education system fit for a diverse 21st Century population”.

“Until the Federal Government starts to recognise home schooling officially in statistics such as the ACARA Annual Report, the hidden growth of home schooling will continue unabated and unsupported,” he said.

“Children will and do thrive educationally despite the system. It seems when systems won’t change, families take control.”

Dr Roy said that when educators and home schooling families can work together, they can create “a powerful pedagogical experience”, as was shown in some remote learning situations.

“Let’s turn home schooling growth into a potential for all to benefit rather than as a last option because of a failed system.”