A damning new report into principal health and wellbeing reveals that Australia’s school leaders are teetering on the brink as increasing stress and workloads take their toll.

The eighth Australian Principals Health and Wellbeing Survey Report, released today, revealed that in 2018, one in three Australian school principals were physically attacked and one in two experienced threats of violence at work.

Associate Professor Philip Riley, from Australian Catholic University’s (ACU) Institute of Positive Psychology and Education and the survey’s chief investigator, said the survey’s results are “a serious concern for the profession as a whole”.

“They indicate serious levels of distress for approximately one out of every three principals across the country,” Riley said.

There were 739 ‘red flag’ emails from the survey’s respondents, which are generated and sent to Riley when a principal answers ‘yes’ to a statement like ‘In the past week I’ve felt like harming myself’.

The survey found the sheer quantity of work and the lack of time to focus on teaching and learning were the greatest sources of principals’ stress. Teacher shortages were also a frequent issue. An increasing source of stress is managing the mental health issues of staff and of students. 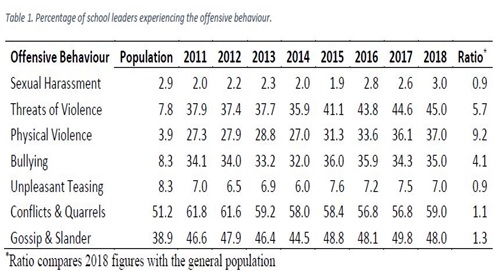 How the states fare 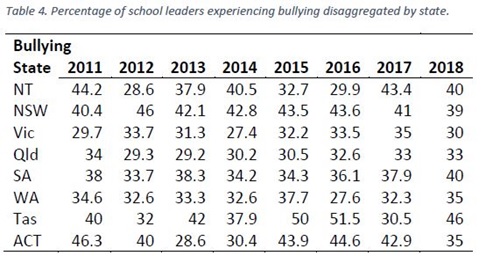